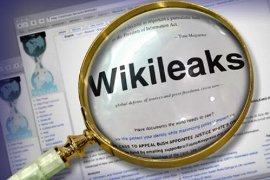 There's been a lot going on for the past week or two surrounding the WikiLeaks release of a number of secret diplomatic cables. The release of the leaked cables must be considered separately from what's been going on in its wake.

We've got the right to know what our government is doing. In fact, since our society is "government of the people, by the people, for the people", I'd argue that we have an obligation to keep an eye on the government. But that is in tension with the government's own responsibility to defend us: some things, like military strategy or, yes, diplomatic proceedings, need to be held close to the vest to be effective at all. This leads to a sort of Catch-22. We need to police the government, but we can't know what it's doing.

I think the only way to resolve the paradox is on a case-by-case basis. Given our current environment, it seems to me that we must come out in favor of disclosure. There is just too much evidence of the government lying to us, with politicians doing what's in their own interest rather than the nation's.

Complicating this is the fact that the publication was done unilaterally, by a foreign actor. As an Australian, Assange doesn't have the same "of the people" relationship to the US government's actions. He's an outsider doing something to us, rather than one of us. Moreover, he undertook this release on his own, without asking any of us how we felt about it. And forcing an unwanted situation onto another is wrong, even if your motives are good.

The bottom line of the WikiLeaks release itself, then is ambiguous. My own personal feelings are that it's a good thing, though. Now let's consider all of the fallout.

For a private entity to decide they don't want to do business with someone is entirely within their rights. It is not a censorship question. Quite the opposite: the 1st Amendment guarantees us the right to decide with whom we want to associate. So forcing, e.g., PayPal or Amazon, to do business with WikiLeaks is morally wrong.

On the other hand, using the fear of government "displeasure", as Lieberman did, is still a form of censorship. Were it not for the implied threat that something would be done to them, or at least that their future dealings with the government would be viewed unfavorably, Amazon and the other corporations would probably not have severed their ties with WikiLeaks. Thus, Lieberman is acting as a censor even without official Congressional action.

Even though they are done in the spirit of righting the wrong of Lieberman's abuse of power, the DDoS attacks are wrong both morally, tactically, and strategically.

They are wrong as a matter of morals because (a) they ignore the right of these entities to decide who to do business with, and (b) they ignore the "collateral damage" they're doing to other people (e.g., merchants who can't make sales). This latter is particularly ironic because these are the same people criticizing (by way of wikileaks releases) the collateral damage that the USA has created in Iraq.

They are wrong as a tactical matter because they may have the opposite of the intended effect. That is, rather than making companies think "I'd better keep WikiLeaks on my client list so I can avoid retribution", they are likely to think "I don't want to ever get anywhere near WikiLeaks (or anything else controversial) or else I may run into trouble", thus making life harder on WikiLeaks and many other organizations.

They are wrong as a larger strategic matter because they're pushing the US government's hand over network security. We just may see demands that traffic be monitored by Cyber Command (NSA) so that attacks can be traced if not prevented.