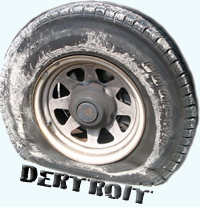 This week, the main buzz is sure to be about possibly bailing-out the automotive industries in Detroit, known as the "Big Three."  The Big Three consist of the three major automotive manufacturers: Ford, General Motors and Chrysler.

Politicians looking to appease their nervous constituency, interest groups (both from the United Auto Workers and those representing Big Automotive) looking for a handout and know-nothing political pundits looking for a juicy story will all tell you this is necessary for the economic well being of the nation.

In this time of economic turmoil, it's easy to suggest government has the answers, especially when it is backed by sweet-sounding rhetoric and promises of better times.  For those that don't know the historical failures of government intervention in the market, it just might sound good enough to swallow.

However, like most government programs, the reality is far, far different from the rhetoric.

Bailouts are ALWAYS bad for the taxpayer, for the economy, and for business.  Why? Because rewarding the mismanagement of American corporations with a taxpayer-subsidized lifeline does NOTHING to encourage reform or fix the problems that pushed the companies to the brink of failure.  As we said in a recent statement, these bailouts do nothing but prolong the inevitable collapse of companies suffering from extreme mismanagement and poor investments.

This is especially true in the case of automotive companies.

Detroit auto manufacturers have failed to keep up with trends in the automotive industry, locked themselves into destructive union contracts and demonstrated a complete lack of initiative in automotive innovations that make their products enticing to consumers.

Why are taxpayers being used to reward this mismanagement?

This is why Daniel J. Mitchell, a senior fellow at The Cato Institute, said the bailouts were like "giving an alcoholic the key to a liquor cabinet." Mitchell went on to list three important reasons why bailouts are bad news:

So, if the government can't bail-out these companies, what should happen to them?

Bankruptcy is by no means a no-hassle "way-out" for companies that have made bad decisions in the past, but it is by far preferable to taxpayers footing the bill for these companies struggling to stay afloat.

Bankruptcy will allow these companies to restructure to a more cost effective format, and it will allow them to "trim the fat" from their overhead so that they may once again become productive (and profitable) without risking trillions of dollars in taxpayer money.  With court-oversight, these automotive factories may also redo expensive and entangling contracts with the Unions—a major reason why these automotive companies have become so costly to operate.

Overall, letting these companies go into restructuring, instead of preserving the status quo with taxpayer funds, is best for the long-term economic stability of both these companies and the nation.

There is no magic bullet for the current economic situation.  However, we can learn from our mistakes, and refuse to repeat them—that is, don't run to the government to solve the problems that the marketplace should be taking care of itself.

At the beginning of the financial crisis, before government decided it would bailout these firms (by the way, check out how your money is being spent), other companies were looking to buy up their devalued competitors.  Then, government rushed in to do a patch-job, and ended what could have been a very healthy market work-out without the government's help.  Instead, government made the problem worse, with your money on the line.

Unfortunately, both Republicans and Democrats were behind it, leaving the taxpayers with no representation while your money was at stake.

Only the Libertarian Party is the true friend of the taxpayer, and we want you to know we are working night and day to maximize your economic freedom by limiting the power of the government to get involved in the economy.  You've heard of the separation of Church and State, well, we'd like a separation of economy and State.

Hopefully you can use what you've read today to help battle the collective wisdom that bailouts are good for the economy, and we'll check back in next week with more for you about liberty and freedom in the United States.