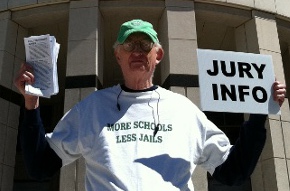 UPDATE: Julian has been sentenced to 145 days. He wishes to hire a lawyer to appeal his conviction. See Julian's webpage for more information. Other places that are covering Julian's saga include George Donnelly's site and the Civil Disobedience Evolution Fund page. A fundraising effort has been started. If this money is not used for his defense all donations will be returned to the donors.

NJ Libertarian Candidate for NJ Assembly (district 37) and longtime freedom activist Julian Heicklen has been arrested in Florida for defying Judge Perry's Administrative Order banning pamphleting in or around the Orange or Osceola court houses. The below video has been provided by Orlando Cop Watch.

Judge Perry's unlawful order has been written about previously on this website.

Recently Libertarian activist Mark Schmidter was sentenced to 151 days for the same offense.

I did a half-hour program regarding the NJLP projects on a program called "Mike and the Coach" that appeared on Bayonne's public access channel.